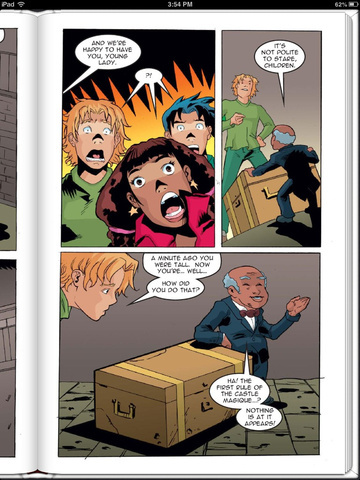 I must admit that Scott Lobdell’s “The Hardy Boys” series is becoming an interesting series to read, although still not the perfect five star series I was expecting. So, I had picked up another volume of this great series called “Abracadeath,” which is the eleventh volume in the series!

In this volume, Frank and Joe Hardy help out their fellow Bayport High School classmate, Dia the Amazing, as she sets out to Castle Magique to become an apprentice of the famous magician the Great Marconi! However, it turns out that there is something amiss in the castle as the Hardy Boys try to solve a case that involves a dog named Poppy going missing and they suspect that some of the competitors (Karnaq, Glom and Miss Tique) might have something to do with Poppy’s kidnapping.

Can Frank and Joe solve this case?

Scott Lobdell’s writing: Scott Lobdell’s writing continues to bring so much humor and mystery to the “Hardy Boys” series and I really enjoyed the fact that this volume focused more on magic since I was always interested in magic and fantasy as a whole and I think that bringing the magic elements in this volume really gave this series some variety in terms of what kind of genres they can explore in this series besides mystery. I also like the fact that we actually get more focus on Frank and Joe’s classmates in this volume since in many of the “Hardy Boys” volumes that I had read, we rarely have stories that actually centered around Frank and Joe’s classmates and having this volume focus on Dia, a classmate of theirs who wants to become a magician, was a breath of fresh air for me in regards to this series.

The reason why I gave this book a four star rating was because I felt that the story was a bit all over the place as I was not sure about what the actual plot of the story was. I was not sure if the plot was about the Hardy Boys searching for the dog Poppy or allowing their classmate Dia to fulfill her dream of becoming a magician. I would have liked it better if the mystery plot regarding both Poppy and Dia actually tied up with each other so that it would not feel like we are reading two different storylines that are going on at the same time.

Overall, “The Hardy Boys: Abracadeath” is a great volume that is full of magic and mystery that fans of the “Hardy Boys” series will enjoy!