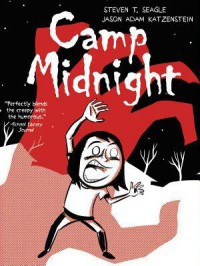 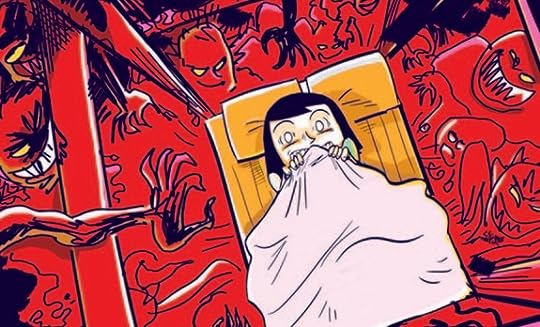 I would like to thank NetGalley and Image Comics for providing me a copy of this book in exchange for an honest review.

The story starts off with a young girl named Skye being taken to her divorced dad’s house by her mom as Skye is going to spend her summer vacation with her dad and his new wife Gayle, who Skye takes an immediate dislike to and even calls her “step-monster.” Things get worse when Skye discovers that her dad and her “step-monster” are going to make her go to summer camp for that year in order for her to discover herself and even though Skye was against the idea, they still forced her to go to summer camp. When Skye got on the bus to camp, she discovers that something is weird about the bus she went on as all the campers are monsters such as vampires, werewolves and witches and it was then that Skye realizes that she went on the wrong bus and is heading to the scary and mysterious camp, Camp Midnight. While Skye spent some time at Camp Midnight, she found that she did not belong in that camp due to her being human, even though she became fast friends with a shy and mysterious girl named Mia. It was then that Skye has to prove to everyone that she is happy with being herself even if she is different from everyone else.

Steven T. Seagle’s writing: When I found out that Steven T. Seagle was involved in big animated projects like “Ben 10” and “Big Hero 6,” I was like “OH GREAT!!! We have not had a big time TV writer writing comic books since Joss Whedon’s run on “Astonishing X-Men!” So, I was quite interested to see what kind of story Steven T. Seagle was going to write for this comic book and I was quite impressed by how this story turned out! I liked the way that Steven T. Seagle combine both horror and slice of life elements into this story as it made the story unique to read since it is rare that I read horror stories that mostly focus on the characters’ personal lives rather than trying to scare the readers. I also like the way that Steven T. Seagle wrote most of the characters, especially Skye and Mia and even though there were times where I was a bit annoyed with Skye’s attitude, I can actually sympathize with her situation as she was thrown into a new experience that she did not want to be in at the first place and she is having trouble trying to cope with being in a new environment and trying to discover herself in the process. Steven T. Seagle has also done a great job at providing humor in this story as I found myself laughing at some of Skye’s sarcastic remarks about her situation as it made her experience much funnier to read about! 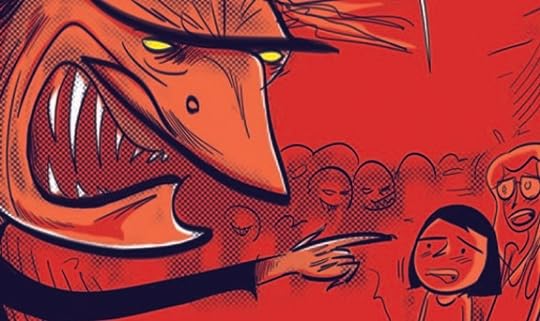 The reason why I gave this book a four star rating was because I felt that the story was a bit rushed and the artwork was a bit too chaotic at times. In regards to the story being a bit rushed, I felt like we did not get enough information about why Skye’s parents divorced and when her father met Gayle, his new wife. Also, I would have liked to know where Camp Midnight came from since it seemed a bit odd to have Camp Midnight show out of nowhere. As with the artwork, as much as I like how zany Jason Adam Katzenstein’s artwork is, I felt that there were many scenes where the artwork got a bit too chaotic and I often had trouble trying to figure out what was going on in the scene due to the artwork being all over the place.

Overall, “Camp Midnight” is a great comic book about the importance of being yourself that comic book fans will enjoy!