Who's That Knocking on Christmas Eve? by Jan Brett 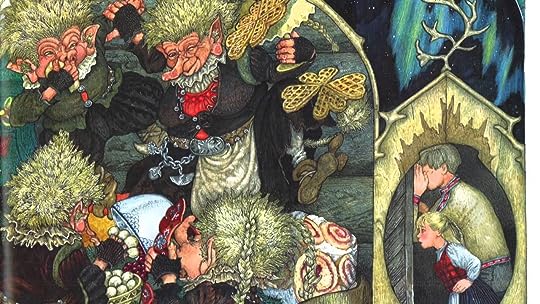 Alright! Lately, I have been taking a break from reading folktales from around the world, but now I am trying to get back into reading more folktales from around the world! I just stumbled upon this little gem of a book called “Who’s That Knocking on Christmas Eve?” which is a children’s book by Jan Brett that takes place in Norway and it is about how a boy from Finnmark and a young girl named Kyri tried to ward off a pack of trolls from spoiling their Christmas dinner. “Who’s That Knocking on Christmas Eve?” is a truly brilliant book for children who love Norwegian folktales and lovable bears!

On Christmas Eve, a boy from Finn mark was trekking on a northern place on his way to Oslo to show off his ice bear to the townsfolk, when he spots a cozy hut that was occupied by a little girl named Kyri, whose father had gone out to stop a group of mischievous trolls from eating their Christmas dinner. The boy from Finn mark then arrives at the hut and asks Kyri to let him inside the house and they also let the ice bear sleep under the warm stove. Suddenly, the two kids hear a loud knocking at the door and they knew immediately that the trolls were trying to get inside the house to eat the delicious Christmas dinner.

Oh my goodness! I just really adored this book and not only because it has gorgeous illustrations and an exciting story, but it is also a folktale and I love folktales! Jan Brett has certainly done a wonderful job with both the writing and the illustrations of this book as they are beautiful and inventive in every way and they are much more gorgeous in this book than in her other books! I loved the way that she illustrates the boy from Finn mark with blonde hair and wears a stylish Norwegian outfit that has a blunt grey and gold tint color with red and blue lacings over it. I also loved the images of the trolls themselves as they have spiky blond hair, long noses and big lips which truly make them look extremely mischievous and I also loved the illustrations of the northern lights detailed at the top of the main illustrations as they have images of various characters from the book in blue and white colors and are shown as northern light looking characters overlooking the situation in the main illustrations. Jan Brett has also done an excellent job at writing this story as the characters are truly inventive to read about, even though I personally wished that the boy had an actual name like the girl instead of just being called “the boy from Finn mark.” I loved the fact that both boy from Finn mark and Kyri were both resourceful in trying to outsmart the trolls as the trolls were trying to steal their food, but the kids would out think them at every turn. The trolls were truly shown as raucous characters, just as the book said and you will easily find yourself sympathizing with Kyri’s predicament as the trolls were barging into Kyri’s home without her permission and that is enough to make anyone angry!

Overall, “Who’s That Knocking on Christmas Eve?” is a fantastic book for fans of Jan Brett’s work and who love reading Norwegian folktales. I would recommend this book to children ages four and up since there is nothing inappropriate in this book.