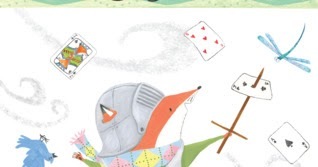 I would like to thank NetGalley and Tanglewood Publishing Inc. for providing me a copy of this book in exchange for an honest review.

The story starts off with a young fox named Argyle Fox who wanted to go outside and play, but his mother warns him that it is very windy outside and that he might not be able to play the games that he wanted to play. But, Argyle Fox went outside to play with his cards anyway and while Argyle was playing with his cards, the wind blows his cards away and Argyle had to go back home to find something else to play with. Argyle then finds an old spider costume and decided to play as a spider in the trees outside. But the squirrels warned Argyle that it is too windy outside to play as a spider. But Argyle ignored the squirrels’ warnings and continued playing outside, but then the wind comes up and blows at Argyle, which causes him to get tangled in his homemade webs. Argyle then goes back home and tried to find another game to play outside and every time Argyle tries to find a new game to play on this windy day, the wind just keeps on messing up his games. Just as Argyle was going to give up playing games outside, his mother quietly encourages to think of another game to play on a windy day.

What game can Argyle play on a windy day?

I have been reading many children’s books that deal with the main characters (usually children) trying to find a fun game to play whether they are inside or outside and it has been awhile since I had read such as book as this. Marie Letourneau has done a great job at telling a story about a young fox’s determination to play outside, despite it being a windy day and I enjoyed seeing the various games that Argyle tries out on the windy day such as playing as a spider and playing as a pirate. I also like the fact that Argyle never gave up on trying to find the right game to play on the windy day as it shows that he has a lot of determination in trying out various games, no matter how windy the day got. I really loved the fact that Argyle’s mother was supportive of Argyle’s determination in finding the perfect game to play on a windy day as it was great seeing a parent support their child during their time of need and I liked the fact that Argyle’s mother encouraged Argyle to find a different game that would be more suitable to play in the wind. Marie Letourneau’s artwork is adorable and colorful to look at as I loved the images of Argyle Fox doing different activities such as playing as a spider and playing as a pirate and I also loved the images of the wind coming in with the words “WHOOSH” accompanying it as it gives it a huge presence in the story. 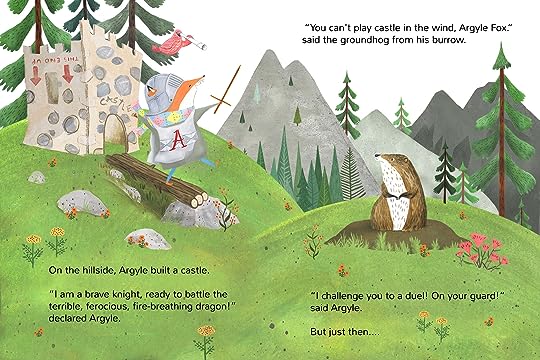 The reason why I gave this story a four-star rating was because even though I found the story to be really cute, I have already read plenty of children’s books where the main character is trying to find a new game to play either outside or inside the house and I just found this story to be a bit repetitive at this point.

Overall, “Argyle Fox” is a truly cute story about encouraging children to find good games to play on a windy day and I would recommend this book to children ages four and up since there is nothing inappropriate in this book.