Superman and the Miserable, Rotten, No Fun, Really Bad Day by Dave Croatto 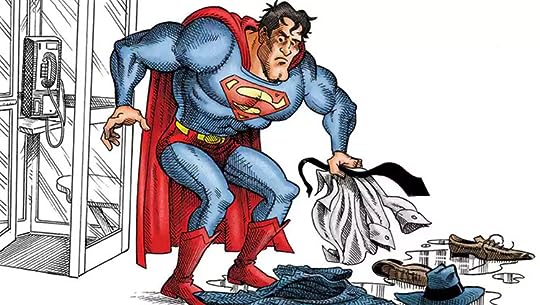 I would like to thank Edelweiss and Mad Books for providing me a copy of this book in exchange for an honest review.

I remembered I used to watch Mad TV when I was little and I was a bit curious about this new parody book involving Superman that Mad Books had created and I managed to request it from Edelweiss. Since I was familiar with Mad TV, I was wondering if this was going to be a vulgar parody of Superman. BUT, I WAS WRONG! “Superman and the Miserable, Rotten, No Fun, Really Bad Day” which is written by Dave Croatto along with artwork by Tom Richmond is a clever and hilarious parody on the popular children’s classic “Alexander and the Terrible, Horrible, No Good, Very Bad Day” and it is definitely one parody that will have you rolling on the floor laughing!

The story starts off with Superman having trouble getting up in the morning as he accidentally stepped on his glasses and also realized at that moment that he may have sleep walked during the night. It was then that Superman found out that he was going to have a very bad day and man was he right! When Superman was on his way to work, he had to fight Doomsday, but in doing so, he ended up coming to work late and his boss Perry ended up yelling at him in front of everyone. Then, when Superman went to the Justice League, he was forced to do monitor duty, which was a job he really hated doing. Superman then thinks about moving to the Fortress of Solitude.

Will Superman’s day get even worse from here?

Wow! This…was…so…amazing!!! I have always loved parodies of my favorite franchises (provided that they are done right) and this was one parody that I felt was done right! Dave Croatto has done a fantastic job at writing this book as it not only greatly parodies “Alexander and the Terrible, Horrible, No Good, Very Bad Day,” but it also sticks closely to the Superman mythos such as mentioning characters like Lois Lane, Jimmy and Perry White, the Fortress of Solitude and Superman’s time in the Justice League. I also loved the way that Dave Croatto weaved these two worlds together and manages to create a unique and hilarious take on the everyday life of Superman. Probably, some of my favorite parts in this book was the part where Superman busted up his shampoo bottle when he let loose his heat vision by accident and the part where Superman did not get the chance to ride in Wonder Woman’s invisible jet! Tom Richmond’s artwork was truly creative and greatly captures the feel of the artwork in “Alexander and the Terrible, Horrible, No Good, Very Bad Day.” I especially loved the fact that Superman is the only character in color while all the other characters are in black and white as it shows that Superman is the main focus of this story and it shows how he views each bad situation he gets into.