I would like to thank NetGalley and Lion Forge for providing me a copy of this book in exchange for an honest review.

Now, I have been reading fairy tale retellings for many years and I had read retellings of stories like “Cinderella,” “The Three Little Pigs,” “Sleeping Beauty” and “Snow White and the Seven Dwarfs.” So, imagine my surprise and delight in seeing this new retelling of “Little Red Riding Hood” from NetGalley called “The Little Red Wolf” by Amélie Fléchais and I just had to pick this book up! After I read this book, I have to say that this was one of the most creative and heartbreaking retellings of “Little Red Riding Hood” I had ever read!

Amélie Fléchais’ writing: Wow! Just…wow! I never would have thought that I would ever read a “Little Red Riding Hood” retelling told from the wolf’s perspective (even though I had read a parody book of the “Three Little Pigs” told from the wolf’s perspective called “The True Story of the Three Little Pigs”). Amélie Fléchais has done a fantastic job at retelling the classic “Little Red Riding Hood” story from the wolf’s point of view as the wolf presented here is shown as being more sympathetic than the hunter and the young girl compared to the original story and that is what made this such a unique and creative read for me! I like the fact that the wolf here is presented as a young cub who does not know about the dangers of being around a hunter and is actually innocent of any wrongdoing in this story (well, except for accidentally eating all of the rabbit he was supposed to give to his grandmother). I also loved the mysterious and intense atmosphere that Amélie Fléchais provided in this story as I was sitting on the edge of my seat trying to see if any horrible disaster will befall Little Red Wolf and how he would be able to handle himself (or who would help him out) if he got into such a scary and dangerous situation.

Amélie Fléchais’ artwork: Amélie Fléchais’ artwork is probably the highlight of this book as all the images are drawn in watercolor paintings, which makes the imagery so gorgeous to look at. I also loved the haunting feel that Amélie Fléchais shows in the artwork as the illustrations are mostly in dark colors and it gives the story a mysterious and eerie feel, especially during the scenes where Little Red Wolf gets lost in the forest. But, probably my most favorite image in this book was the image of Little Red Wolf himself as he is drawn in an extremely adorable manner as he has large puppy dog eyes and a small cute nose that really brings out his innocent and adorable nature. 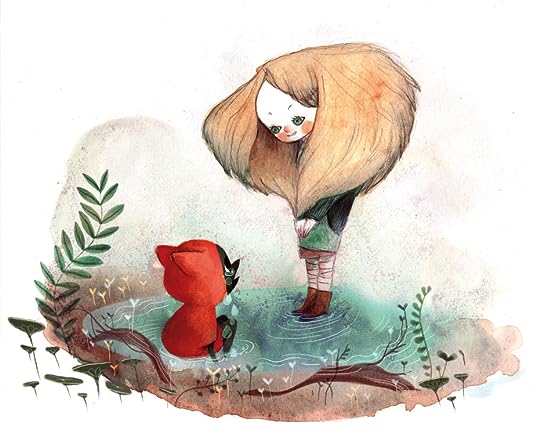 For anyone who does not like scary moments in graphic novels or novels in general, there are some intense scenes in this book that might scare younger readers, such as Little Red Wolf getting lost in the forest and the danger of possibly encountering the huntsman and his daughter.
Also, I felt that the ending was a bit too abrupt and I wished that more was explained about the revelation at the end, rather than just stopping the story as soon as the revelation was being made. All this just made me want to have a sequel to this story so that way, the ending would be made clearer to me than it is now and so that way we can have a more broader expansion on the characters themselves.

Overall, “The Little Red Wolf” is one retelling of “Little Red Riding Hood” that you should definitely check out, especially if you enjoy hearing classic fairy tales being told from a different perspective! I would recommend this book to children ages six and up since the imagery might scare smaller children.