The Spooky Tail of Prewitt Peacock by Bill Peet 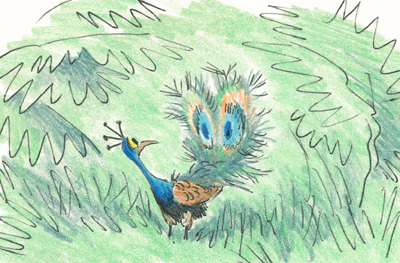 “The Spooky Tail of Prewitt Peacock” is a children’s book about self-confidence from the popular children’s author, Bill Peet. This book details Prewitt’s, a peacock, dilemma when his tail, at first was scrawny, becomes a horrifying looking tail over a matter of days! This children’s book is truly a unique treat to read as you would never imagine a tail forming into a scary face over time and that will definitely catch any child’s attention.

Bill Peet does an excellent job with both the illustrations and the writing for the story. Bill Peet’s illustrations are vibrant and beautiful as he effectively draws the trees in the jungle in a scraggly way. The image that is the highlight in this book is the image of Prewitt’s tail. Prewitt’s tail is certainly a sight to see as Bill Peet draws Prewitt’s tail with two angry looking blue eyes and a frightening looking jagged mouth with sharp looking greenish teeth. Also, I thought that the clutching feathery claws added an even spookier effect as they really look like they are going to grab you real quick. Bill Peet’s writing is excellent as he tells the story of a peacock named Prewitt who at first lost confidence in himself because of his tail, but then gains it back when he realizes that his scary looking tail makes him unique from the other peacocks. I also loved the way that Prewitt defended his tail against the other peacocks stating that he would rather have a tai that is scary-looking than to have no tail. 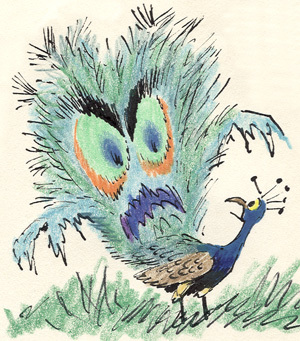 “The Spooky Tail of Prewitt Peacock” is probably one of Bill Peet’s most lovable books as it expresses the value of individuality. I would recommend this book to children ages six and up since this book would be a tad bit too long for smaller children to get through.