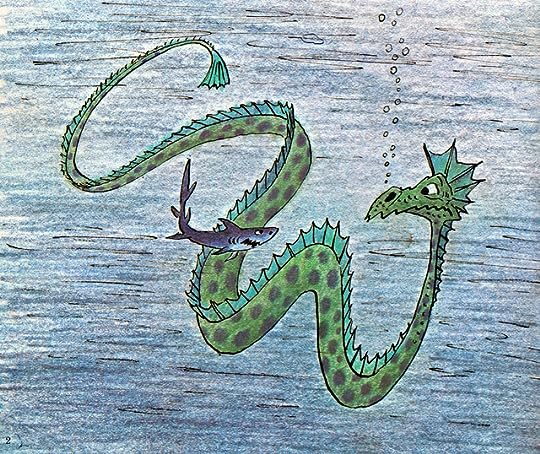 “Cyrus the Unsinkable Sea Serpent” is an adventurous book from Bill Peet about how a friendly sea serpent who at first wanted to wreck a ship to have fun, ends up trying to protect a ship full of passengers looking for a new land. “Cyrus the Unsinkable Sea Serpent” may be tough for smaller children to read but older children would most likely enjoy the adventurous scenes contained in this book.

Bill Peet’s writing is extremely inventive and exciting as he writes the story about a sea serpent that is willing to risk his life to protect the people on a voyage for a new life. Bill Peet is extremely inventive whenever he uses various words such as “doldrums” and “bedraggled” to make the story more clever and dramatic. Also, the idea that Cyrus is more like a friendly sea serpent rather than a vicious one makes the story more creative as people usually believe that sea monsters are meant to be scary. Bill Peet’s illustrations are beautiful and colorful, especially of the scenes where he illustrates the sea as a calm ocean for the water is beautifully blue and during the storm scenes, he makes the sky dark and the ocean smashing viciously at the Primrose. 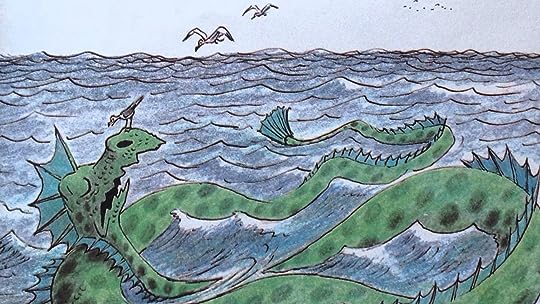 Parents should know that there are many advanced words in this book and that this book may be a bit too long for younger children to handle. Some of the advanced words mentioned are “pilings,” “doldrums,” and “bedraggled” and young children may not understand what those words mean. Parents should write down the advanced words down on a piece of paper and define them so that the younger children would understand what the word means and therefore, it would make it easier for them to read this book. Also, the length of this book is a bit too long than any normal children’s book and that may be a bit too tiresome for some small children to handle, so parents should read at least a few pages a day so that children would not get too tired of this book.

“Cyrus the Unsinkable Sea Serpent” is a wonderful story about the power of friendship and how it is better to help people rather than be cruel towards them and children would easily enjoy this book for ages. I would recommend this book to children ages seven and up since the advanced words and the length of the book may be a bit too challenging for smaller children.