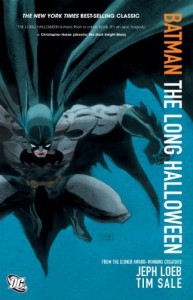 The Origins of Harvey Dent has begun!

Now, I have been reading many Batman comics whose stories dealt with Batman defeating one of his greatest foes, the Joker.  But, I had always wanted to read some “Batman” stories that dealt with another one of Batman’s greatest foes, Two-Face!  I got interested in Two-Face’s story when I saw one of the episodes on “Batman: The Animated Series” that dealt with the origin tale of Two-Face and I was amazed at how well that episode portrayed the relationship between Batman and Two-Face.  So, this caused me to pick up a Batman comic book that deals with Two-Face and lo and behold, I found “Batman: The Long Halloween!”

Carmine “The Roman” Falcone was Gotham City’s untouchable Crime Lord and District Attorney, Harvey Dent, Batman and Captain James Gordon were all trying to take down this crime lord for months now.  However, the actual story starts when “The Roman” was throwing a wedding party for his nephew Johnny Viti, but later on, it turns out that somebody had murdered Johnny Viti and later on, a gang called “The Irish.”  This then leads to many murders that are directly involved with “The Roman’s” family and the serial killer became known as “Holiday” since the killer only kills people on various holidays such as Thanksgiving and Christmas. Can Batman, James Gordon and Harvey Dent catch this serial killer before it is too late?

Jeph Loeb’s writing: Now, I had seen many different versions of Harvey Dent’s origins including the animated series’ version and Nolan’s famous “Batman” film, “The Dark Knight,” but I really enjoyed Jeph Loeb’s version of Harvey Dent and how he made his character mysterious.  Jeph Loeb had done an excellent job at writing this story as the serial killer starts killing certain members of “The Roman’s” family on holidays such as Halloween, Thanksgiving, Christmas and New Year’s Eve and I loved how all thirteen chapters in this book is titled a different holiday like Chapter Two is titled “Thanksgiving” and Chapter Three is titled “Christmas.”  I also loved the way that Jeph Loeb made this story similar to a crime noir as the mystery of the story involves Batman, Harvey Dent and James Gordon trying to figure out who the “Holiday” serial killer is and how they will stop him from killing anymore victims and I loved seeing the scenes of the “Holiday” serial killer murdering people as there are no words accompanying the evil deeds and the artwork pretty much does the talking for those scenes.  I really enjoyed the turbulent relationship between Catwoman and Batman as we are left in the dark about Catwoman’s true motives for helping out Batman even though she is a world class burglar and it was interesting trying to figure out what her true motives are.  The way that Jeph Loeb portrayed Harvey Dent’s mysterious and intense character was extremely well done as Harvey Dent also wants to protect Gotham City from crime, but he seems to want to do things the hard way to get the job done.  What was so amazing about this story was the fact that Jeph Loeb introduced many of Batman’s greatest enemies (the Joker, Solomon Grundy, Poison Ivy, The Scarecrow, and the Mad Hatter) into this one story and they all play a huge role in Batman trying to discover “Holiday’s” secret identity.

Tim Sale’s artwork:  Tim Sale’s artwork in this graphic novel was just astonishing as the artwork is dark and gritty and it really fits well with the dark tone of this story!  I loved the way that Tim Sale drew Batman himself as Batman looks large and intimidating in every image and I loved the way that Tim Sale drew Batman’s cape as twirling around Batman, giving a frightening feel to Batman’s presence.  I also loved the way that Tim Sale drew the shadowing around the characters’ bodies during the night scenes (although the majority of this comic takes place at night) which really made the images extremely creepy to look at.  What I really loved about Tim Sale’s artwork is when the scenes of “Holiday” murdering various victims are in black and white colorings which really made these scenes truly stand out from the other scenes.

Since this story deals with the murders of several characters, there are many scenes where characters are killed off in gruesome ways, which they are mainly shot in the head.  These scenes are also graphic as there is blood everywhere where the characters are shot.  Anyone who is uncomfortable with violence in graphic novels might want to steer away from this graphic novel.  Also, there is some brief language in this graphic novel, although the language is not as strong as you would sometimes see in mature stories

Overall, “Batman: The Long Halloween” is one of the best “Batman” stories about Two-Face ever told and anyone who is a fan of the “Batman” comics should definitely check this graphic novel out!  Also, if you want to read some other great “Batman” comics, here are some recommendations: